With spectacular views across the Atlantic Ocean and an abundance of interesting flora and fauna, the Cliffs of Moher demand to be seen up close.

The Cliffs of Moher are so impressive that 1.5-million visitors a year make the trip out west to see them and they are now the second most popular tourist attraction in Ireland, and rightly so. They really are Ireland’s must-see tourist destination and a Cliffs of Moher tour is an ideal way to experience this unique landscape.

Located in County Clare, which is just a few hours drive from Dublin, the Cliffs of Moher are a series of eight sheer headlands that stretch for 8km (as the crow flies) along the rugged Atlantic coast. At their highest point, they reach 214 metres (702 feet) – if you are scared of heights, it’s probably best if you don’t look down. 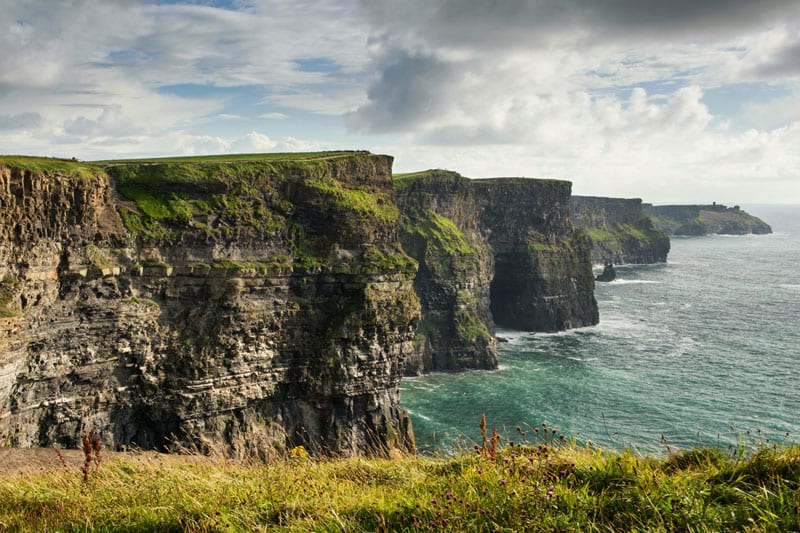 Movie Magic and the Cliffs

Fun fact; the vertigo-inducing ‘Cliffs of Insanity’ in the movie The Princess Bride are actually, you guessed it, the Cliffs of Moher. The Cliffs of Moher have also made cameos in Harry Potter and the Half Blood Prince and the terrific TV show Father Ted. Not familiar with Father Ted? It is must-see TV for any trip to Ireland, think of it as research and familiarisation.

Cliffs of Moher and The Burren

The Cliffs of Moher are steeped in history too and were over 300-million years in the making. They are deemed so special that they form part of the Burren and Cliffs of Moher UNESCO Global Geopark. If you have the time, why not take a tour of the lunar-like landscape of the Burren National Park, home to fairy forts, Celtic crosses, ancient monuments and megalithic tombs that are older than the pyramids. 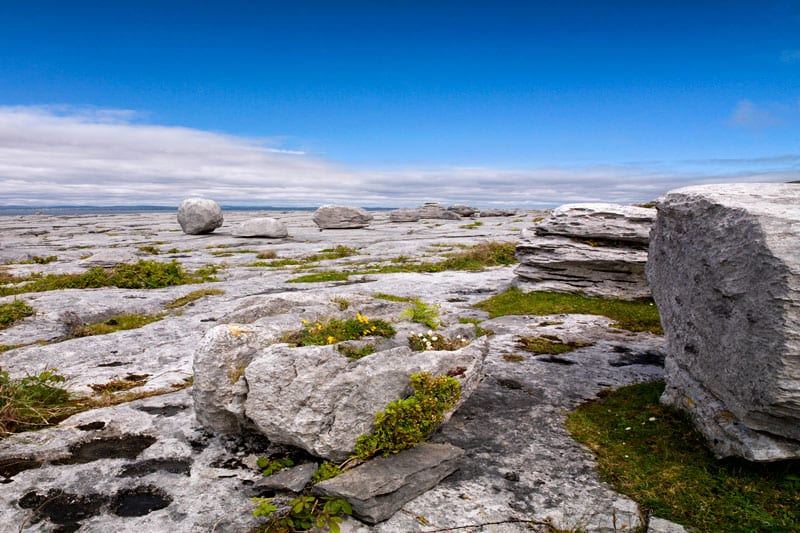 The area around the Cliffs of Moher is also home to about 1100 plant species and during the spring and summer months, a bright blanket of blooms decorate the landscape and fragrant flora perfume the air. This is the Ireland you see on postcards. But no matter what time of year you visit, the Cliffs of Moher are sure to impress. Even on the greyest of days or when enveloped in fog, they look majestic and mystical.

Speaking of which, there are plenty of myths and legends that surround the Cliffs of Moher. If you walk to the most southerly point of the Cliffs of Moher you’ll come to an unusual rock formation in the shape of a woman’s head looking out to sea. Known as Hag’s Head, this is where Mal of Malbay, an old sea-witch (hag), fell to her death chasing Irish hero, Cú Chulainn across the sea stacks. We suggest you learn from Mal’s misfortune and don’t chase anyone at The Cliffs and watch your step as you go. 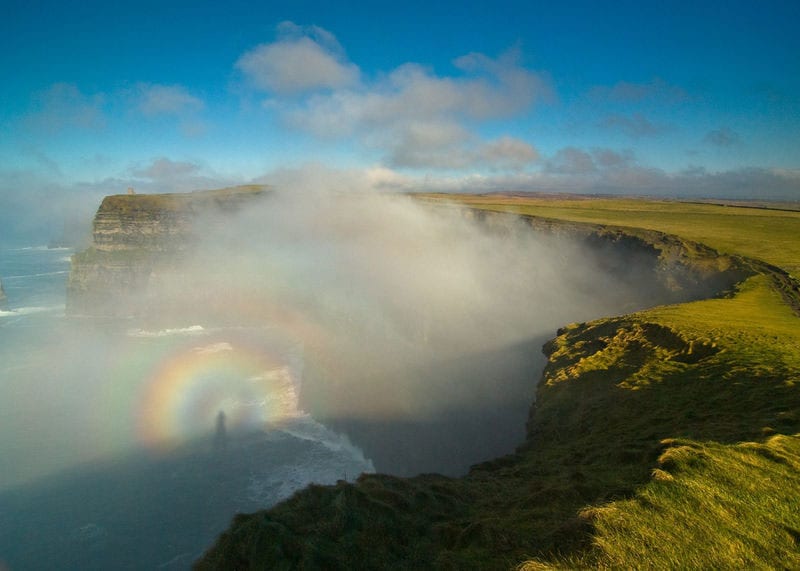 Near the midpoint of the Cliffs of Moher, you’ll find a round stone lookout called O’Brien’s Tower, which was built in 1835. It is one of the most historic and well-known buildings in County Clare. From the top of its viewing platform, you’ll get uninterrupted views right the way across to the Aran Islands and the Twelve Bens mountains in Connemara. Face the other way and you’ll see the whitewashed lighthouse at Loop Head. The views just seem to go on forever. 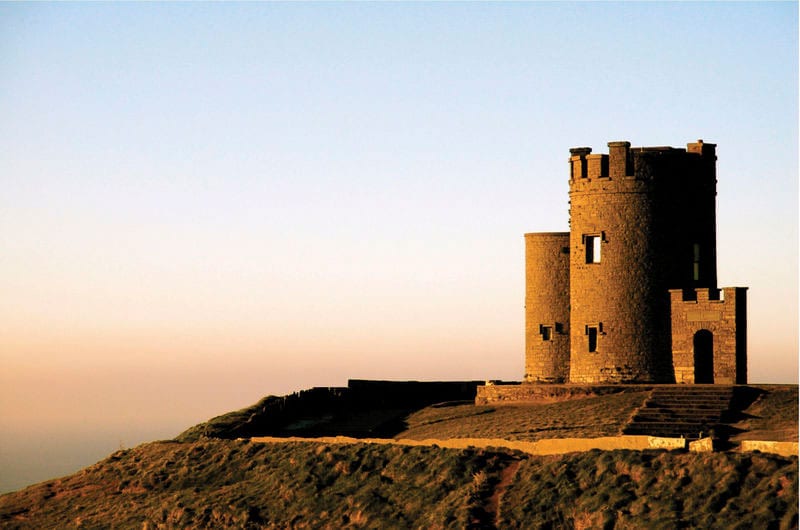 Dolphin Watching on the Cliffs

But don’t forget to look out at the Atlantic Ocean itself as, depending on the time of year, you can spot seals, dolphins, whales and whale sharks. So, be sure to bring your binoculars.

Birdwatching on the Cliffs

Those binoculars will also come in handy if you are into birdwatching. The Cliffs of Moher are home to more than 20 species of nesting birds, including 9 species of breeding seabirds and the largest inland colony of Atlantic Puffins in Ireland. From May to August the seabirds brighten The Cliffs with their colourful beaks and feathers and their sociable chatter provides the soundtrack to the summer. 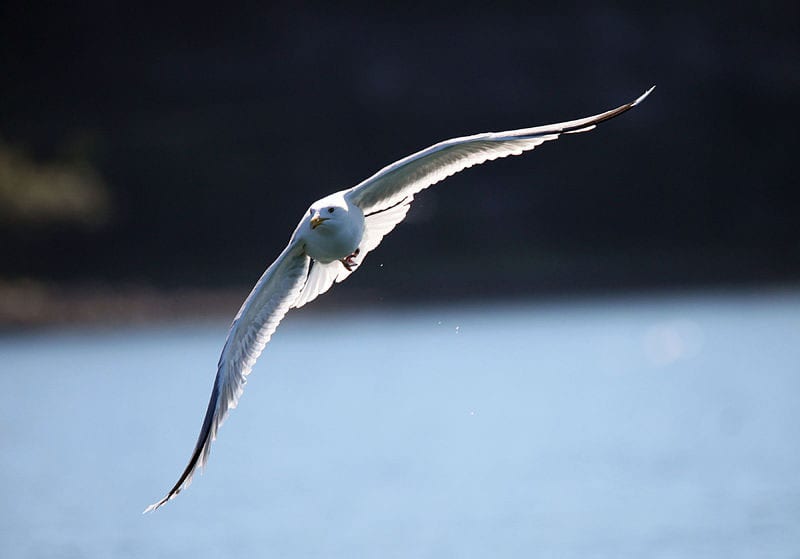 Cliffs of Moher and the Wild Atlantic Way

As an added bonus, the Cliffs of Moher are located on the Wild Atlantic Way – the longest coastal touring route in the world – which treats travellers to seemingly never-ending displays of rugged seascapes, wild landscapes, and dramatic coastlines. The roads can get quite narrow and twisty so if you don’t fancy driving, book a Cliffs of Moher tour and relax and enjoy the views and let an expert tackle the winding Irish roads.

Getting to the Cliffs of Moher from Dublin can easily be done on a day trip and you can even combine this with a stop-off in vibrant Galway.

A day trip from Dublin will take you through the colourful counties of Kildare and Limerick before reaching County Clare where you’ll see Bunratty Castle, a 15th-century medieval Norman fortress and the world famous surfing and golfing destination of Lahinch.

Experience the Rugged Scenery of Ireland

No matter how you travel to The Cliffs of Moher, you’ll experience one of the most dramatic settings in Ireland with some of the most breathtaking views. The soundtrack of wildlife, wind and the Atlantic crashing into the cliffs below just adds to the theatrical nature of it all.

It’s no wonder the Cliffs of Moher are Ireland’s must-see tourist destination.