The Cliffs of Moher is by far one of the most popular tourist destinations in Ireland, attracting over one million visitors each year.

The Cliffs of Moher are approximately 14 km long, and they rise to 214 meters (just above 700ft) at their highest point, just north of O’Brien’s Tower.

While most people are already familiar with what the cliffs look like and how they formed, here are 5 fascinating facts you may not have known about the Cliffs of Moher that have become one of the essential places in the Irish landscape. There are definitely more than a few a great reasons to plan a day trip to the Cliffs of Moher this summer – read on to find out what they are!

1. It is the site of ancient Irish legends

Many folklore stories surround the cliffs of Moher. One famous one is about an unusual rock formation, at the most southerly point.

It closely resembles a woman’s head looking out to the sea when viewed from the North. This is called Hag’s Head.

Local Irish legend tells of how an old hag, (a colloquial term for an older, ugly lady or witch) called Mal.

She fell in love with the Irish hero Cú Chulainn and chased him all over Ireland. Cú Chulainn did not return her feelings.

He finally ended up at Loop Head in Co.Clare, seemingly cornered by Mal.

As he was a superhero of sorts, he saw an exit route and made his escape by hopping across sea stacks towards the Cliffs of Moher, using them like stepping-stones. Mal, not so nimble as he, went following after him but lost her footing and was dashed to pieces against the cliff.  They say the sea turned red where she fell, all the way to the Cliffs.

Malbay is thought to have been named after her. 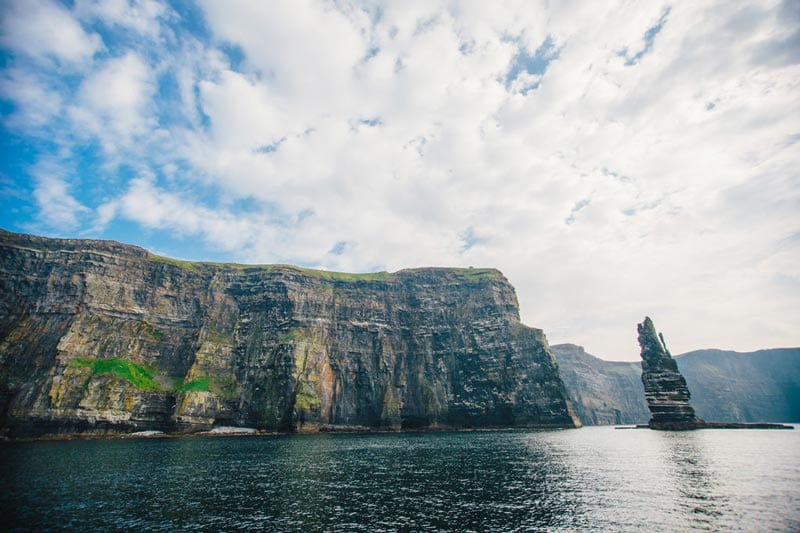 This is a significant area of importance for bird species and is a specially protected area by Irish and EU legislation. It is a breeding site for over 30,000 seabirds and was classified as a Refuge for Fauna in 1988. The area is home to large numbers of Guillemot and Razorbills, as well as Atlantic Puffins, Peregrine Falcon, Kittiwake and Fulmar. Some endangered bird species like Choughs also call this place home.

While there are many seabird colonies on the offshore islands around Ireland, the Cliffs of Moher are home to the largest mainland colony. Around the end of March, The Atlantic Puffin arrives, a true favourite of many.

During the nesting season, bird viewing is possible from any of the cliff-side pathways and viewing areas, often with hundreds of Puffin to see, which is a very special sight. Binoculars highly recommended!

Beautiful wildflowers and grasses cloak the cliffs in spring and summer. From atop the cliffs dolphins, whales and seals can often be spotted.  There is also a large population of hares on site and a herd of feral goats that live precariously near Hag’s Head. 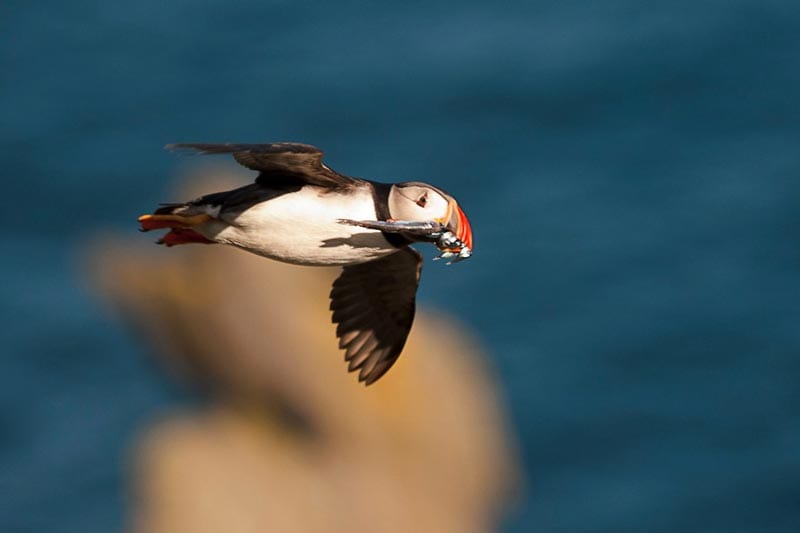 As the dramatic backdrop for many movies, TV series, music videos and adverts, The Cliffs of Moher have become a recognisable landmark on the big screen. Some of the bigger and more recent movies filmed at the Cliffs of Moher include Harry Potter and the Half-Blood Prince, The Princess Bride, The Yank, Into the West and The Mackintosh Man.

Some might remember the scene from the comedy TV show Father Ted, where Father Jack’s wheelchair rolls backwards over the edge of the cliff? That’s the Cliffs of Moher. During the filming of Princess Bride, the cliffs were portrayed as the Cliffs of Insanity. Many productions use the Cliffs of Moher as a focal point to represent the rugged wild west of Ireland. Let’s face it…they are rather photogenic!

While many people believe The Cliffs of Moher to be the most popular tourist attraction in Ireland, it actually ranks at number two in the list of Ireland’s top fee-paying attractions. The number of visitors it attracts comes in just above Dublin Zoo and the Book of Kells. It’s no wonder why it receives such large volumes of visitors. This natural wonder is a spectacular place to visit, for young and old, for nature lovers and photographers. Over a million people each year can’t be wrong about its captivating appeal.

5. Tourism at the famous cliffs is nothing new.

Originally the vantage point of these mighty cliffs would have been used as a lookout post, a place for quarrying, fishing, collecting birds’ eggs and feathers, with evidence dating back to the 1st century BC.

Towards the 16th century, tourism was generated largely by travel writers (not unlike today really). Lying on the perimeter of Europe, Ireland was a less popular destination. However, travel journals of Ireland from the 1780’s and onwards have been found, with entries describing the beauty and ferocity of the cliffs.

O’Brien’s tower, just south of today’s visitor centre, was built in 1835 by the local landowner, Cornelius O’Brien. His entrepreneurial mind built the tower in response to a visibly growing tourism market. He thought it might benefit the local economy and help to release people from poverty. The idea behind its build was to charge visitors for the even better viewpoint from atop the tower. However, the sight from the bottom is really just as good, especially on a clear day. But it adds a nice touch to the area. 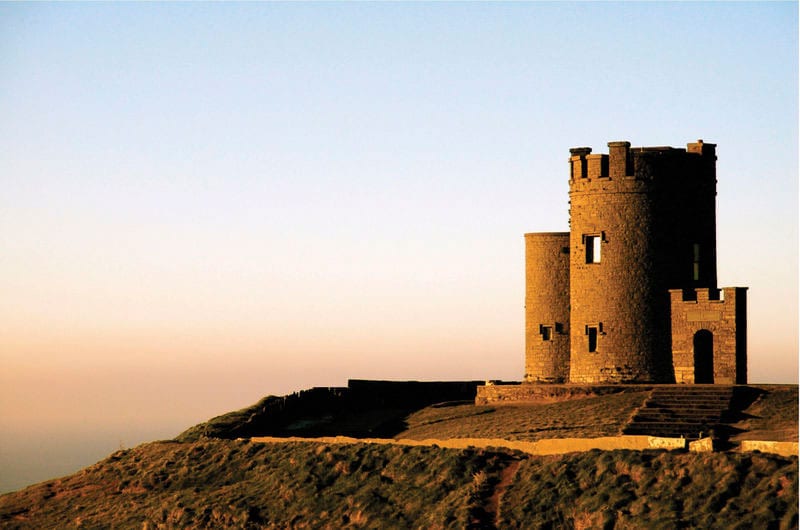 If these facts have convinced you to take a visit, be sure to check out the day tour from Dublin to the Cliffs of Moher which also stops off in Galway City!