The Wild Rover Tours Northern Ireland Highlights Tour won 2nd Best Day Trip in the World for Cultural Experiences in 2020.  It includes stops in Belfast and at some of Northern Ireland's most iconic attractions. Our day trip offers guests a unique opportunity to delve into the history and culture of the region thanks to the experience and knowledge of our amazing tour guides.

Don't forget to check individual tour pages for up to date information on tour itineraries.

No visit to Belfast should go without a tour of the Titanic Experience, voted “World’s Leading Tourist Attraction’ at the prestigious World Travel Awards 2016.

The Titanic Experience Tour allows you to explore the origins of this tragic and legendary ship along with its passengers and crew. The Titanic Experience features nine interpretive galleries, full-scale reproductions, and the opportunity to walk in the shoes of those who built, served, and took passage on the ill-fated liner.

One of the most popular features of the tour allows visitors to experience the Shipyard Ride. This electronic dark ride provides an exciting and informative trip through the experience of constructing mighty passenger liners such as Titanic and her sister ships. Visitors can also board SS Nomadic, the last White Star vessel in existence.

The Titanic experience is one of the most popular stops on our Northern Ireland Highlights tour. Voted the #1 day tour in Ireland in 2020.

Belfast served as a focal point for the violence that lasted for generations in Northern Ireland. Its citizens’ suffering served as a constant reminder of the destructiveness of war and terrorism. Visitors to Belfast can learn much from what they will see and hear from their guide on the Black Taxi Tour of Belfast.

One truly memorable stop lies along Falls Road and Shankill Road. Here a 5.5 metre – 17 .6 ft high concrete wall known locally and in political terminology as the Peace Wall. All passengers will have the opportunity to sign the peace wall and have their pictures taken by your guide next to the murals and the wall.

Visitors will also see the tale of troubles in the Belfast area and abroad told on the sides of buildings in the form of powerful murals.

You have the option to experience the Black Taxi Tour of Belfast City on our highlights of Northern Ireland day tour This tour came 2nd in the world for Cultural Experiences in TripAdvisor’s Traveller's Choice Awards 2020.

The conflicting stories political tour of Belfast is an opportunity to learn about ‘The Troubles’ from both a Loyalist and Republican perspective. Hear from ex-political prisoners on both sides and learn about the personal and communal impact of the conflict. They will share some aspects of the violence that were never aired on television or printed in the papers.

The tour includes a stop at the Peace Wall dividing the modern city of Belfast. Here you can admire the political murals, largely considered the largest outdoor gallery in the world. You can also opt to sign the Peace Wall, leaving your thoughts alongside those of Bill Clinton and The Dalai Lama.

Conflicting Stories Political Tour is an exciting chance to explore Belfast through a political and historical lens.

A trip to Northern Ireland is incomplete without a visit to the gem in the crown – the Giant’s Causeway, Ireland’s only UNESCO World Heritage site. It is a dramatic landscape of about 40,000 basalt columns emerging from the sea off the North Coast of Antrim in Northern Ireland. The columns formed millions of years ago after a volcanic eruption.

The area is so impressive that it inspired the legend of giant Fionn Mac Cumhaill who built the stepping stones to reach Scotland. The area is a must-see on any visit to Northern Ireland – whether you’re interested in the mythology and folklore, or simply want to take in the beauty of the rugged Northern Coastline.

Visit the Giant’s Causeway on our highlights of Northern Ireland day tour or on our Game of Thrones day tour from Dublin.

About three miles from the Giant’s Causeway, Bushmills Whiskey Distillery has been creating ‘water of life’ since 1608, making this the oldest working distillery in Ireland!

Family and friends have worked together for generations at Bushmills, passing on their whiskey making knowledge. Here, the philosophy is that small, handcrafted batches are the best way to create beautifully smooth Irish whiskey.

Take the opportunity to purchase some of this famed triple distilled whiskey in the gift shop and wander around the visitor’s centre for an insight into this fascinating distillery.

This spectacular attraction is a must when visiting the North Coast. The bridge offers visitors a beautiful and truly exhilarating coastal path experience. Walk across this world-famous rope bridge which traverses a 30 metre deep and 20-metre wide chasm – that is if you’re brave enough!

Visit Carrick-a-Rede Rope Bridge on our highlights of Northern Ireland day tour. Voted the #1 day tour in Ireland in 2020.

Dunluce Castle was built by the McQuillan family around 1500. It is located on the top of sheer-sided cliffs 100 feet above the ocean. Game of Thrones fans will recognize the castle as the House of Greyjoy. The Castle’s dramatic history of violence, intrigue and rebellion is matched by the scandal and betrayal committed by the Greyjoy’s in Game of Thrones.

CS Lewis is also reputed to have taken inspiration from the castle for the Royal Castle of Cair Paravel in the Chronicles of Narnia.

Dunluce Castle was once owned by British Prime Minister Winston Churchill after it was passed into the ownership of the Churchill family as a result of marriage.

Visit Dunluce Castle on our Game of Thrones day tour from Dublin.

The Stuart family planted this beautiful avenue of beech trees in the 18th century. They couldn’t have known the worldwide interest their now-famous beech trees would achieve. More than two centuries later, they starred as the King’s Road in Game of Thrones and this stunning avenue became one of the most photographed destinations in Northern Ireland, and it’s easy to see why!

The road is reputedly haunted by a spectral 'Grey Lady' who appears at dusk among the trees. She silently glides along the roadside and disappears as she passes the last beech tree. We guess she will add a bit of character to those photos!

Visit The Dark Hedges on our Game of Thrones day tour from Dublin. 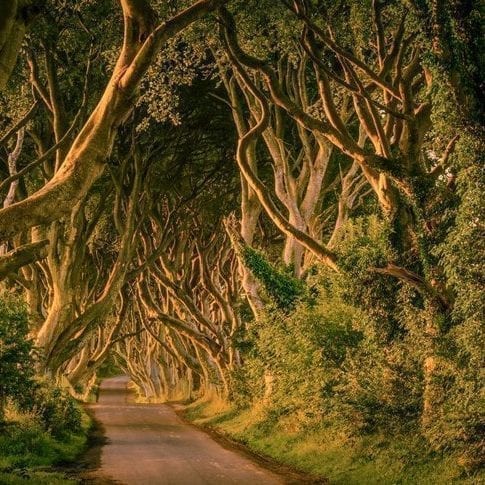 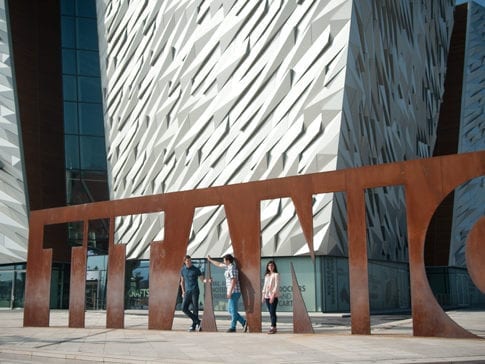 Private Tour to Belfast from Dublin 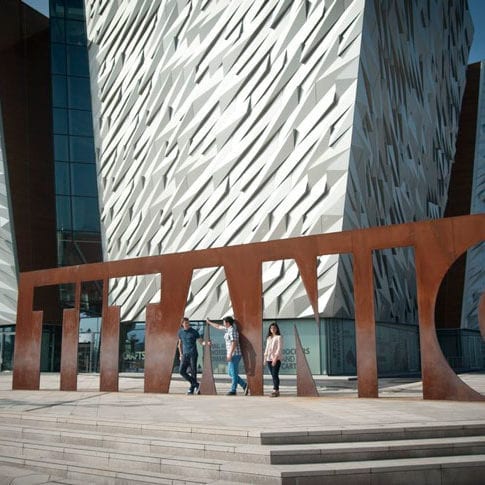 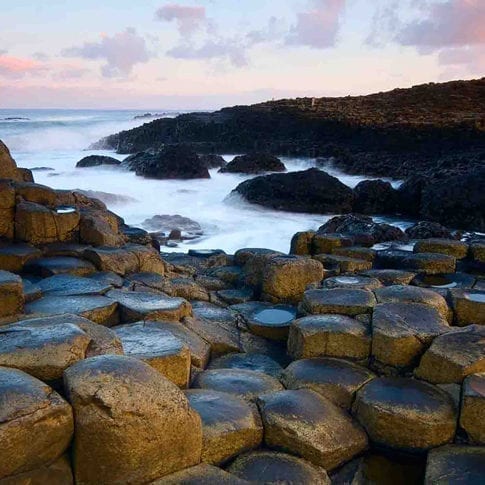 Game of Thrones Tour From Dublin 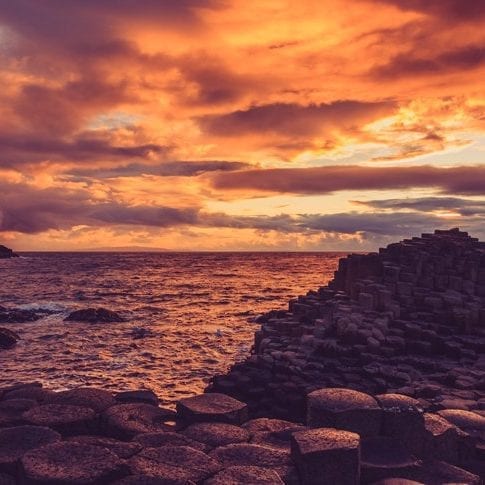 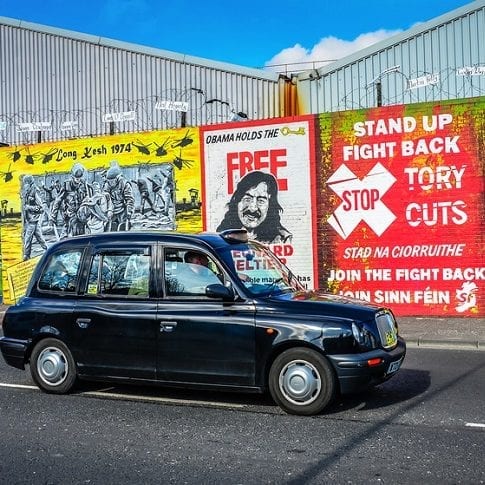